Orange (left)/Green (Right)
Eva is the deuteragonist in the comedy film Igor.

With Brain and Scamper's help, Igor assembles a huge, monstrous being from human remains. When he brings the monster to life, however, he discovers that the "Evil Bone" he gave her was not activated, making her kind, friendly and feminine. Igor tries to convince the monster that she is evil, inadvertently naming her "Eva."

Igor attempts to brainwash Eva into becoming evil by bringing her to a brainwashing salon where people are hooked into a machine and shown monster movies for a few hours. Brain also gets the same thing in order to watch TV, but he has taken the remote for Eva's room and every time he tries to change the channel the TV in Eva's room changes. She therefore watches the movie Annie for several hours, so when Eva gets out she can speak English and wants to be an actress. Igor then takes her back to the castle to be destroyed in the car. On the way back to the castle, Igor's nemesis Dr. Schadenfreude and Jackie try to steal Eva by using a shrink ray to shrink them all, but are instead struck by the ray themselves. Igor decides to exhibit Eva at the science fair anyway, telling her that the fair is an "Annie" audition.

Dr. Schadenfreude learns of Eva's existence and attempts to steal her. When that fails, he exposes Igor to King Malbert, who promptly sends Igor to an "Igor Recycling Plant." Schadenfreude activates Eva's Evil Bone and unleashes her on the Science Fair, where she destroys all the Evil Inventions. Scamper and Brain help Igor escape from the Igor Recycling Plant and they learn that Malbert had deliberately killed Malaria's crops with a weather ray that made storm clouds so he could implement his "Evil Inventions" plan, thereby keeping himself in power. Rushing into the arena, Igor reasons with the now completely mindless Eva to deactivate her Evil Bone and allowing her to regain her sweet personality, while Scamper and Brain deactivate the weather ray, which falls and crushes Malbert to death.

Dr. Schadenfreude attempts to take power, but the citizens revolt upon learning of Malbert's deception. Jackie sees that her voice is cracking, so she tries to get another pill but finds she's all out. As Jackie's voice becomes more and more cracked, she transforms into a female Igor. The monarchy has been dissolved and Malaria becomes a republic, with Igor as president. Schadenfreude is relegated to pickle salesman, while the annual Science Fair becomes an annual musical theater showcase. Igor and Eva are planning on making a dog, or adopting one.

Eva is a giant monster that is forty feet tall and made of sewn and stitched together corpses. She has a small head and a massively built body. Her hair is in a slightly pointed black bob. She has a giant muscular right arm and left leg that come from a professional wrestler and a small thin arm on her left, and a small thin right leg that come from a lawyer. She has two different colored eyes with orange on the right and green on the left. Her eyelashes are quite long and blade-like on her left eye. She has normal eyelashes on her right eye. Her left eyelid is made of metal. Her right cheek is held together by three large staples. Her skin is multicolored, but is mostly pale except for the finger with the evil bone which glows green. and staples and stitches are seen all over. Her clothes are a blouse that has green orange and yellow colors with frilled puffed sleeves and a thin ribbon on the chest. Her shoes are flats. She has a tattoo on her right arm that says “Mom.” 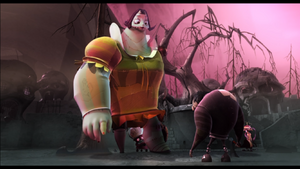 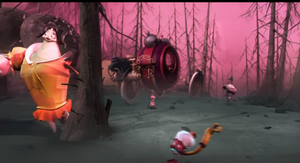 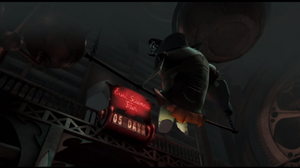 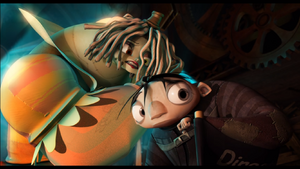